MI7 has taken to the skies over the Alton Towers Resort once again to spy the latest changes across the Resort. With a number of developments anticipated for the 2016 season, including the transformation of Air into Galactica, and the addition of the Rollercoaster Restaurant, we take a look at MI7’s latest transmission.

With Galactica set to launch in Forbidden Valley this April, the area is currently a hive of activity as work is carried out to complete the B&M flying roller coaster’s transformation into the new virtual reality experience. The ride’s track has received a deep clean giving it a much refreshed, like-new, look in preparation for its new theme. Work is progressing on the ride station improvements with the station now being enclosed on both sides, and the brake section just prior to the station being enclosed in scaffolding. In the queue line, the green screen photo booth is under construction at the previous fastrack merge point. Currently there is no sign of the themed features which plans indicated would be installed by the lift hill, although the yellow markings which were placed at the end of last season can still be seen on the ground to indicate where these will go.

The extension of the former Air shop to accommodate the new Rollercoaster Restaurant appears to have had the exterior completed. From the air it is clearly visible where the lighter colour of the old roof joins the darker colour of the new section. As most of the construction for the new food and beverage outlet is now taking place within the building, it is difficult to determine how much progress has been made.

Nemesis, arguably the Resort’s most iconic attraction, has been receiving a significant amount of attention over the winter months. The track is in the process of receiving a complete re-paint with the majority of the ride now a bright white, ready for the rust effects to be reapplied. Although no work has yet been carried out on Nemesis’ station, it is anticipated that this will also receive attention before the start of the main season in March.

Ripsaw’s former site has now been paved over with little evidence of the Huss Top Spin remaining. Work is currently taking place to remove the rock formations which previously separated the ride area from the main pathway through the Valley. At this time it is not known what this area will be used for during the 2016 season 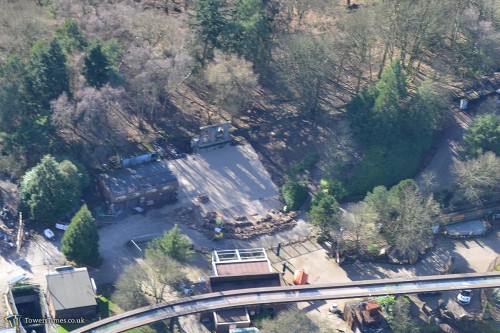 With the Resort confirming that they intend to re-open The Smiler in 2016, there is significant speculation surrounding the much talked about roller coaster and if any changes would be made to it prior to its return to operation.

Scaffolding is currently in place under the sea serpent roll, although it is not known if this is for routine checks, or additional work. A crane is also on site to assist with what is thought to be regular winter maintenance work. Many people were hoping that the appearance of the track would receive some attention over the closed season, however it would seem that this has been left as it was.

As would be expected for this time of year, many of the Theme Park’s other rides and attractions are still in the midst of their routine winter maintenance. Octonauts Rollercoaster Adventure is having work done to refresh its station after it suffered in last year’s wet weather. Both The Flume and Battle Galleons have their lakes currently drained as is usual for this time of year to enable their maintenance to be undertaken. Over by the Towers Ruins the shipping containers which housed the final section of Sub Species: The End Games during Scarefest are still in place, although the tunnel leading from the ruins to the containers has been removed.