Scarefest Makes a Spooktacular Return for 2015

Home/Scarefest Makes a Spooktacular Return for 2015

Scarefest Makes a Spooktacular Return for 2015

Scarefest returned to Alton Towers Resort this weekend offering a completely re-vamped line-up, including two new scare mazes and two new scare zones alongside the return of Terror of the Towers, we take a look at all the news from the opening weekend of this year’s event.

Taking centre stage for Scarefest 2015 is a brand new scare maze offering. Joining Alton Towers Resort’s signature maze, Terror of the Towers, are two new mazes – The Haunting of Molly Crowe and Sub Species: The End Games, all set within the historic Towers Ruins. Featuring a new route, Terror of the Towers retains its ‘What Lies Within’ storyline which sees guests follow in the footsteps of the ill-fated urban explorers who entered the ruins before them. For this year, the entrance has been re-located so guests now first enter the Conservatory into a well themed photography studio where guests can have their picture taken, before making their way into the smaller section of Her Ladyship’s Garden across a specially constructed wooden walkway and into the Ruins themselves. The maze itself includes many familiar elements, including the retention of the strobe finale (although the walkways are wider than before), mixed in with a range of new scenes and features which have been very carefully thought out giving the maze a much more cohesive feel and a dis-orientating route and appears to last slightly longer than in previous years. The Haunting of Molly Crowe is the first of two new scare mazes for this year. Entering via the tunnel behind X-Sector, guests are greeted by an actor who gives a brief pre-show, before putting on a hood and going into the Ruins via the former Sanctuary exit. The maze has an incredibly strong storyline and uses many actors to fully utilise all guests’ senses and create an immersive experience. Even the transition into the final section where guests get to remove their hoods is subtle and seamless. By far the most impressive section of this maze though is the finale which uses a whole host of effects to create one of the strongest endings to a scare maze ever seen at Alton Towers Resort. By far the strongest attraction at this year’s Scarefest is Sub Species: The End Games. Set in a post-apocalyptic sewer system guests take on the role of unwilling victims in The End Games, a twisted game of survival where bets are placed on who will make it out alive. Guests enter through the former Terror of the Towers entrance and are led into a pre-show consisting of a control console where live feeds show people making bets on those entering the maze before being ushered into ‘traps’ ready to be released into the ‘labyrinth’. The maze consists of multiple routes with several occasions where guests decide their own way through the maze meaning groups are easily split up and guests end up on their own for a lot of the experience. Featuring an incredible level of theming, and actors who are very hands on, it is very easy to get genuinely lost once inside. Credit has to be given to the actors within this maze who are very in tune with the effects, picking the ideal moments to create the perfect scare, on some occasions it is the fear and anticipation of what could happen just around the corner which builds the tension much more than the scares themselves. Alton Towers Resort have created a truly terrifying attraction which is fully immersive – once inside you genuinely have no idea where you are and cannot tell the difference when you move from the Ruins into the shipping container section of the maze. Across all three of the mazes, the Resort has to be applauded for creating experiences with fantastic production values, well-judged lighting and special effects, alongside a very talented cast of actors. 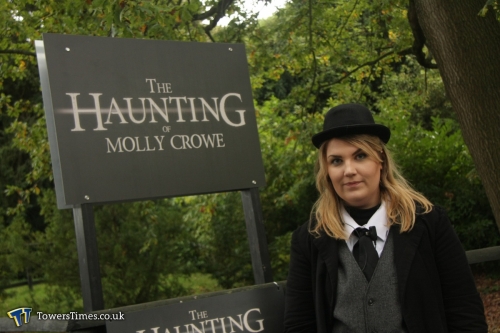 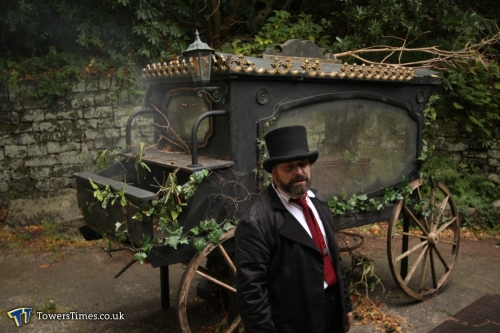 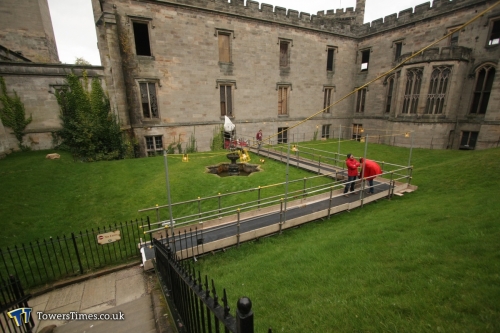 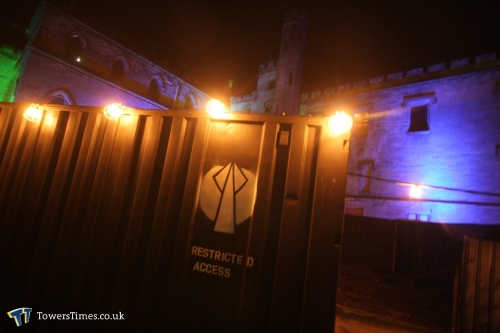 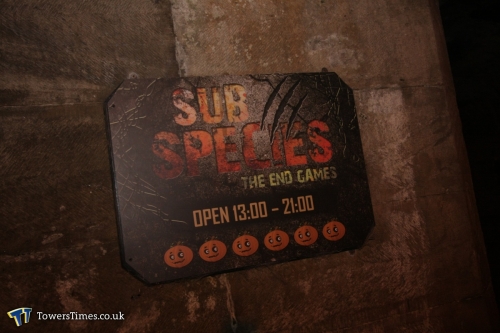 The Resort have also introduced two new scare zones for this year, Dark Apocalypse located in Forbidden Valley, and Nox Infernus situated in Dark Forest. Whereas in previous years the scare zones have been themed walkthroughs which have required guests to queue to enter, this year sees a change where actors simply roam freely in each area. Dark Apocalypse sees zombie type creatures patrol the area between the entrances to Nemesis: Sub Terra and Nemesis (those who do not wish to face the creatures can take the safe path to the right of Forbidden Valley), with creatures ambushing those brave enough to go through. Nox Infernus is primarily located beneath Rita’s scaffolding meaning that guests who wish to ride Th13teen and Rita have to run the gauntlet of wraiths and ghouls. Both zones have minimal theming, however this is more than made up for by the actors who know exactly how far they can push people and really make these new zones work. Smoke and lighting all help to add to the atmosphere. 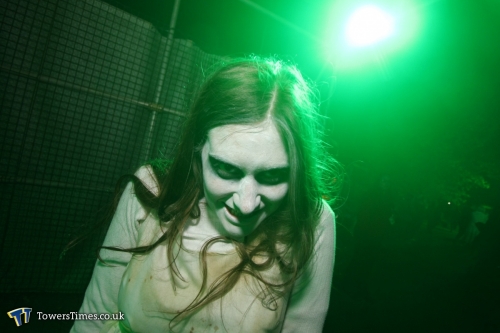 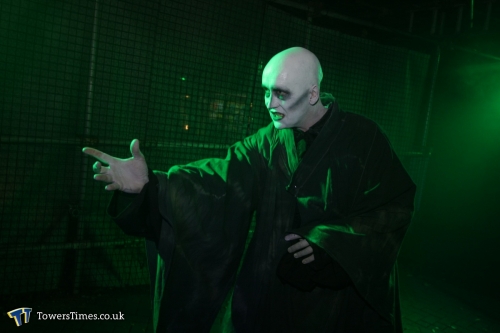 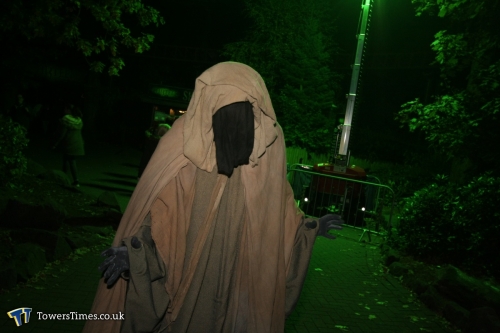 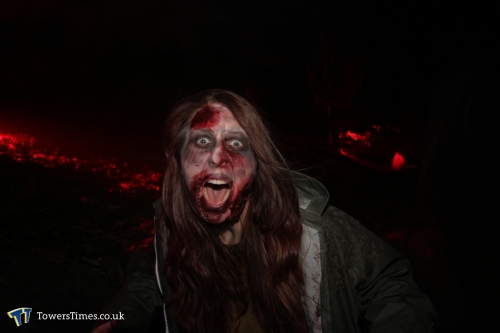 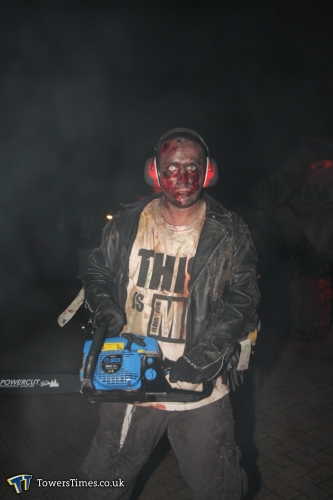 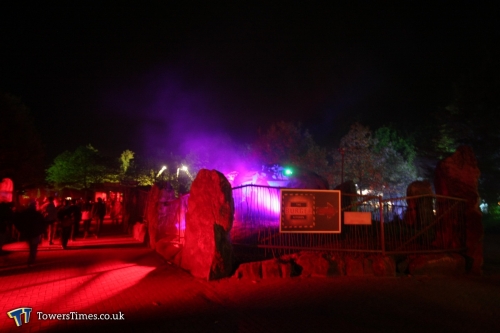 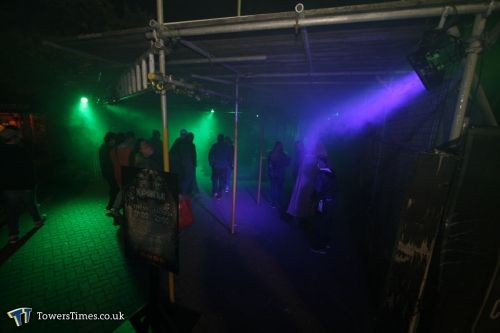 For those who are more interested in spooky fun rather than intense scares, the Resort’s family offering makes a welcome return, with Franklyn, Patch, Skelvin and Phil bringing their own high energy shows to the Trick or Treat Stage in its new home on the Front Lawns. Whilst the shows demonstrated the same high production values, with all the shows having similar casts it was sometimes difficult to differentiate between the shows if guests were not aware of the specific show times. The Alton Ancestors also made a welcome return, with regular flashmobs on Towers Street throughout the morning before bringing Gloomy Wood Alive for the afternoons. 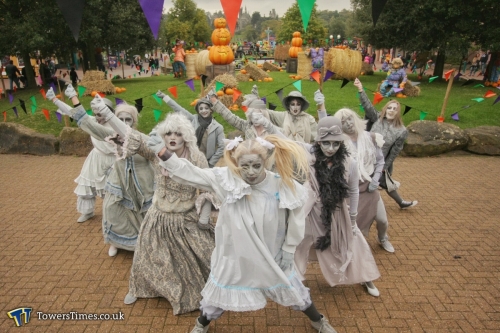 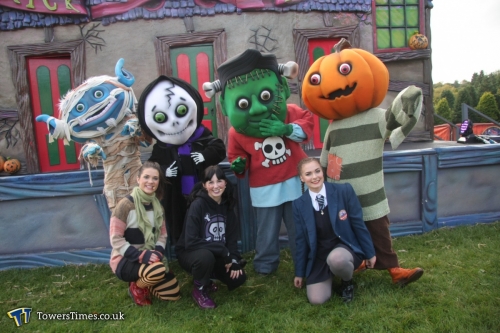 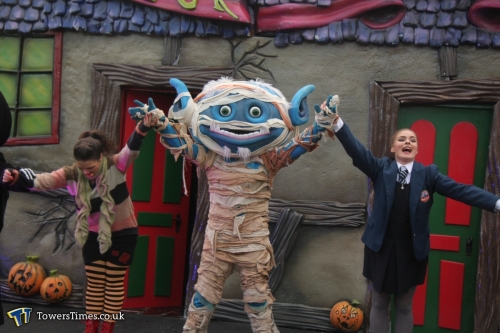 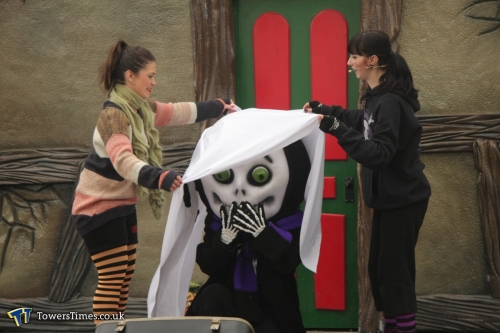 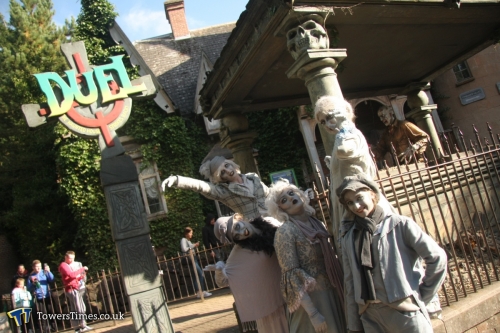 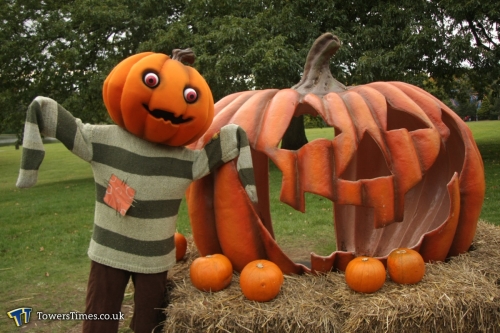 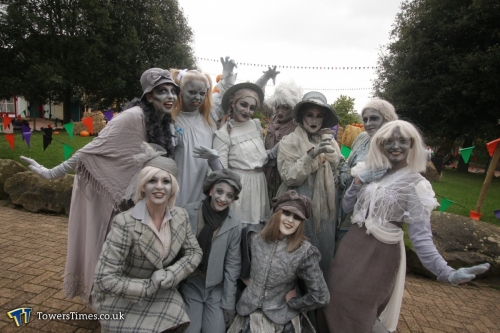 Particular attention seems to have been paid to the decorations on Towers Street this year, with the whole area festooned with vibrant and colourful decorations including scarecrows, pumpkins and bunting. Many of the retail and food and beverage outlets have also received new names especially for Scarefest. Whilst it is nice to see the additional theming in this entrance area, it is perhaps a shame that there wasn’t more of this throughout the Theme Park. Fountain Square looked particularly empty having lost its place as the centre for the family entertainment. 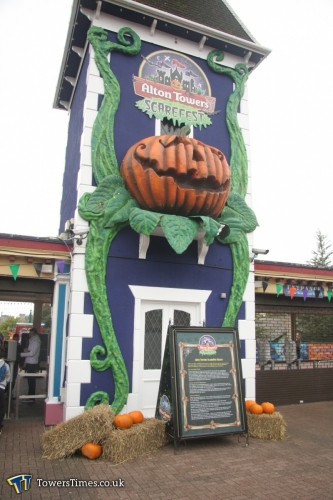 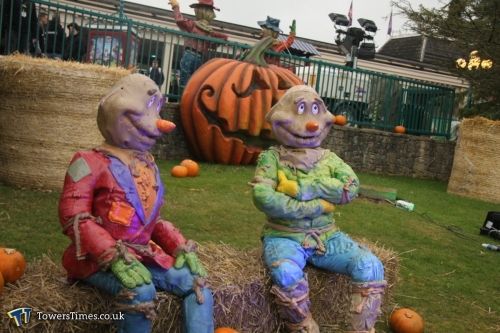 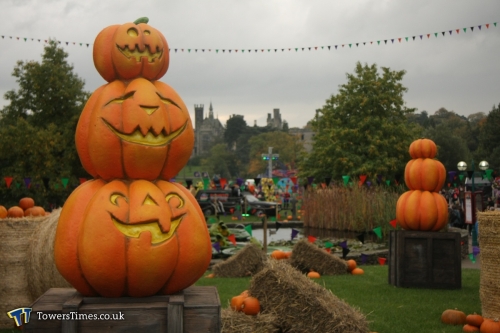 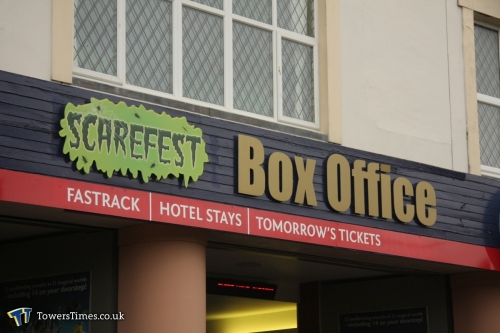 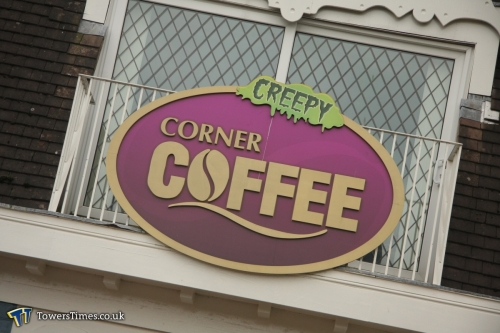 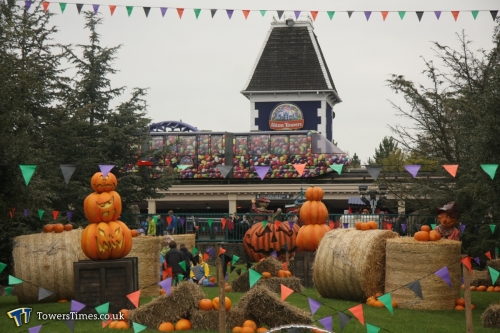 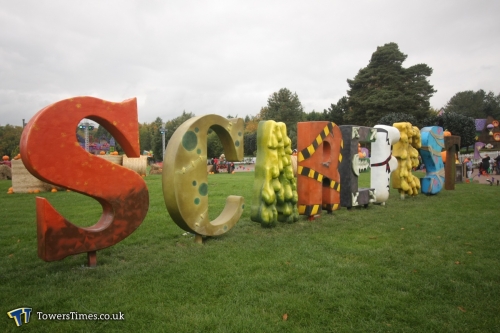 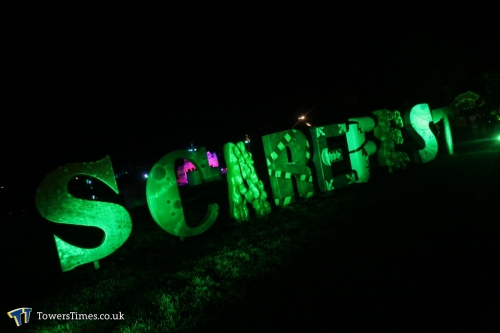 Alongside its standard offering the Resort have also devised a selection of additional options for guests to purchase, including extreme and ‘Maze it Alone’ versions of their scare mazes, an RIP Tour, plus the new escape room experience, Sub Species: Operation Lockdown. Offering an insight into the story behind the mazes, the RIP Tour offers guests the opportunity to be guided between each maze by a dedicated actor who will answer any questions you may have about the Resort’s scare attractions. One of the key benefits is the ability to have ‘front of the line access’ which allows guests on the tour to gain instant access once to each maze. Operation Lockdown is an intense two hour escape experience which challenges guests to solve some fiendishly difficult puzzles and escape from one of four specially designed escape rooms. The experience creates a tense atmosphere throughout with high quality acting from some top scare actors, taking the Sub Species maze to another level from that experienced during standard opening hours and is one of the best experiences offered by the Resort.

It is clear that for 2015 the Resort have made a real effort to create a bigger and better Scarefest than ever before. The scare attraction line-up is the strongest it has ever been, with Sub Species: The End Games and The Haunting of Molly Crowe being some of the most technologically advanced, fully immersive, and intense experiences the Resort have ever created. Whilst the new style scare zones are a refreshing change to the walk throughs seen in previous years, some guests will miss the old Zombies! Scare Zone and Scary Tales style attractions. The loss of these means there is now no middle ground for those too young to enter the 15+ rated scare mazes, but who are also too old for the family entertainment on the Front Lawns. Overall however, Scarefest is a vast improvement on 2014’s offering and it would seem that it is now in a position to build on what the Resort have achieved this year.

Have you visited or are planning to visit Scarefest this year? Make sure you have your say over on the Attraction Source Forum. With the end of the 2015 season fast approaching we’ll continue to bring you all the latest developments.