The full map for the 2015 season has been released on the Alton Towers Resort website today, featuring the new attraction for this season – Octonauts Rollercoaster Adventure – but also, in a surprise move, suggests that The Blade will not be operating for the main season.[vc_row][vc_column width=”1/1″][vc_column_text]The new park map, styled in a similar way to previous years, sees all references to the classic pirate ship ride being removed, with no illustration of the ride, or listing for it present under the available attractions in Forbidden Valley. Its omission would seem to suggest that The Blade will not be operating for the main season this year, which would indicate that instead, the ride will be standing but not operating (SBNO). Although The Blade is listed as one of the attractions nearing the end of its natural life span in the Long Term Development Plan, the move comes as a surprise to fans of the park, especially with the ride only recently being in operation for the February Half Term event, and still being listed on the Alton Towers Resort website. However, despite operating at half term, the ride was omitted from the Early Ride Time line up for the new season, despite having been regularly included in previous years. Should The Blade not operate this season, as it’s removal from the park map seems to suggest, this would further detract from the already small number of ‘thrill flats’ leaving just Ripsaw and Enterprise in the thrill category after the removal of Submission last year.[/vc_column_text][vc_column_text]An Alton Towers classic, The Blade arrived at the park in 1981 as ‘The Pirate Ship’ and was located in the Fantasy World area of the park (now known as X-Sector). In 1997, as part of the preparations for the arrival of Oblivion, the ride was re-located to Forbidden Valley, and re-named ‘The Blade’ to occupy the space left by the departure of the Thunder Looper.[/vc_column_text][/vc_column][/vc_row][vc_row][vc_column width=”1/1″][vc_column_text]The rest of the park map sees little change from previous seasons. As expected, Space Adventures has now been completely removed from Adventure Land leaving just Sonic Spinball and Battle Beams listed in that area. Octonauts Rollercoaster Adventure has also been added to CBeebies Land as expected.[/vc_column_text] 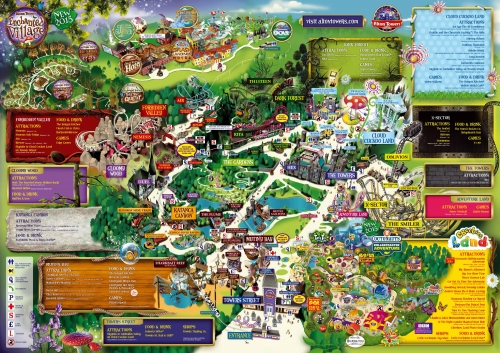