Work has steadily been progressing on Alton Towers Resort’s latest family development, CBeebies Land over the past few weeks. As the grand opening on the 24th May draws ever nearer, TowersTimes takes a look at the changes since the last construction update.

One of the most noticeable changes is the re-theme of the old farmyard windmill.  Now sporting a striking yellow and purple colour scheme, to match the CBeebies brand colours, the old windmill has been transformed into a large clock and sits at the centre of the land. It will also be the lost person centre enabling families to be reunited should they get separated. 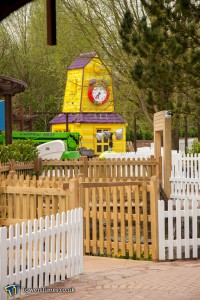 Get Set Go Tree Top Adventure continues to have a range of decoration and theming elements added to both the station and along the circuit of the ride. The outside of the station has seen further paintwork added. Previously one of the exterior supports was painted in a brown colour (the left vertical support in the image below), however this is now purple suggesting that, even at this late stage, changes are still being made to achieve the best possible finish. The outside has also seen the addition of a CBeebies alarm clock, whilst inside some of the now familiar CBeebies Blobs have appeared and some ride signage has been put in place with the top part of the sign being recycled from Squirrel Nutty. 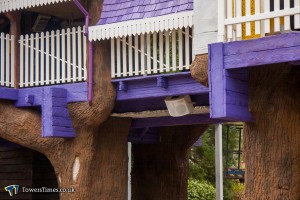 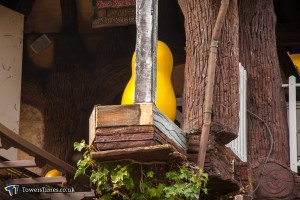 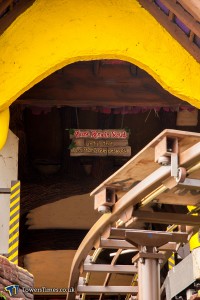 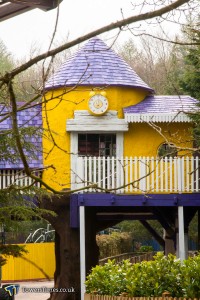 The CBeebies Blobs also appear throughout the circuit of the ride with the Blobs depicted doing a range of activities from skateboarding to painting. 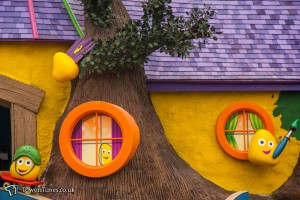 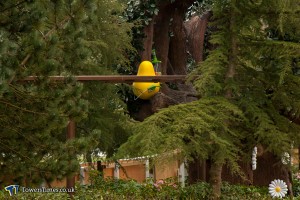 It’s not just the outside of the buildings that have received an invasion from the CBeebies Blobs. The Blobs have also set up home in the tunnels through which the ride passes through on its journey around the circuit, suggesting there will be plenty of opportunities for little ones to interact with the characters. 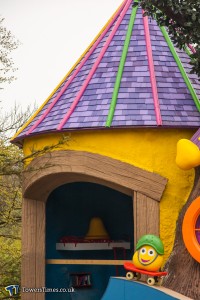 At the far end of the land what would appear to be the exit is taking shape. Utilising similar theming to the entrance with the daisies and foliage there still appears to be some work to do on this section – could there be something more to come here? 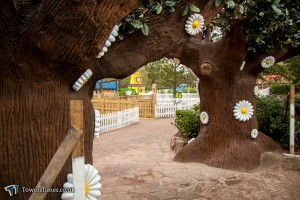 Progress is also continuing with a range of other attractions across the land. The Something Special Sensory Garden has had a number of new plants added, as well as Grandad Tumble’s shed having subtle hints of yellow paint added to tie it into the whole area. A red pole has also been installed in the centre of the Sensory Garden, although as it is still in its plastic wrapping it is not known if this is just a CCTV post or something more. 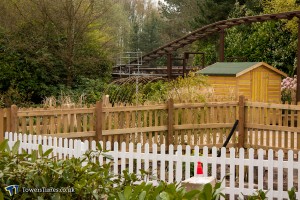 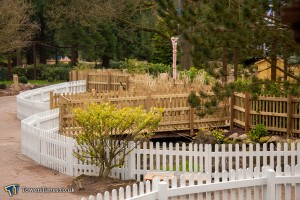 The guidance system for Postman Pat’s Parcel Post now appears to be fully installed along the ride path. There have also been a number of other elements added – a selection of fake safety cones have appeared in the ride area on the edge of what appears to be a path connecting two parts of the ride track. At this stage it is unclear exactly what part these will play in the ride, could the path indicate an opportunity for character interaction, or is there something yet to be installed to fill that gap? 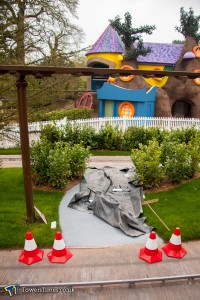 Other items of theming have appeared across the area including a range of banners – particularly in the Big Fun Showtime arena. One particular item which has been spotted next to one of the tunnels for Get Set Go is what appears to be a large pink frame. It is unclear whether this is simply a clearance checker, or if it is a piece of theming yet to be installed? 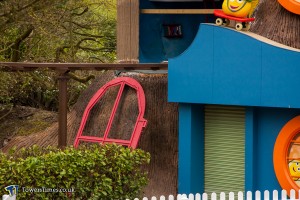 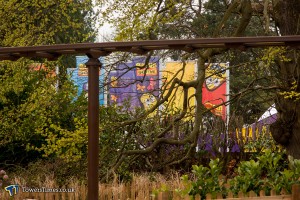 Over the past week, the Alton Towers Resort has also started to step up its marketing for CBeebies Land, with the unveiling of a three part video series on its YouTube channel hosted by Denise Van Outen. The short films will follow the mother of one as she road-tests the new attractions and investigates how children will be able to learn through play and what young families can expect from the 5-acre area when it opens on 24th May.

“This series is all about trading Essex glamour for a construction site. I watch CBeebies with my daughter Betsy all the time and now she will get to meet some of her favourite characters in person when the attraction opens in May. More than that though, it’s a great chance for her to learn as well; I’ve seen an amazing mix of practical education and laugh-out-loud entertainment. I think the CBeebies Land team has literally thought of everything, but best of all, I got to see it first!”

Make sure you discuss your thoughts about the latest family development at the Alton Towers Resort in our dedicated topic on the TowersTimes Forum.