2014 Opening Weekend Round Up

Home/2014 Opening Weekend Round Up

2014 Opening Weekend Round Up

After 4 long months, the Alton Towers Resort has finally opened its doors for the 2014 season. Alongside the major development for the 2014 season – CBeebies Land – there has been a host of other smaller developments across the resort. TowersTimes takes a look at what’s changed for the new season and reflects on the opening weekend.

Many people were hoping that significant work would be undertaken on the £18 million roller-coaster to help avert the issues that plagued the ride throughout its debut season. Over the closed season, a new permanent queue-line extension has been added, which heads from the main entrance of the ride towards the toilet block at the top of X-Sector. It would appear staff have the option to configure the queue in a number of ways depending on how busy the ride is at any given time. Over the weekend, the queue was primarily used for guests wishing to queue for the ride prior to its opening at 10am.Visitors can now also have a permanent reminder of their marmalisation with the addition of the option to purchase a DVD of their ride for £15 (there is also the option to purchase a DVD and photo for £20). 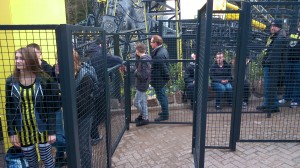 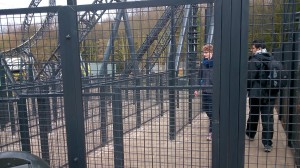 The ride itself experienced a mixed first weekend of 2014, having a few periods of downtime across the two days. The most significant of these occurred on the Saturday afternoon with a train becoming stuck at the top of the vertical lift hill, resulting in it needing to be slowly reversed back down before being re-sent to complete the circuit. The smoke effect at the start of the ride was not working, it is not yet known if this will be permanently turned off. 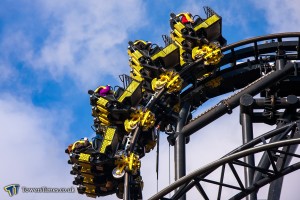 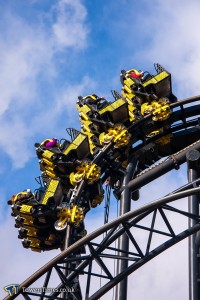 The Smiler stuck at the top of the vertical lift

Other Rides and Attractions

As previously reported by TowersTimes, Submission has left the resort for the 2014 season. Sadly there is no new attraction in its place and the area where Submission used to stand has now been covered with turf. Elsewhere on park, a range of general maintenance has been carried out including minor re-paints on a number of attractions – such as Nemesis’ station. The Skyride has had a new audio track added for this season detailing the history of The Gardens, and several of the games stands have been moved to new locations across the park.

A few rides suffered some minor operational difficulties. Th13teen in particular appeared to struggle across the weekend, suffering numerous periods of downtime – especially on Saturday, and was reduced to single train operation for a significant amount of time.

There has also been a new addition to the live entertainment this season, with The Alton Towers Traffic Patrol being on duty at the start and end of each day. Based on Towers Street, this squad of officers ensure that guests are safe from speeding prams, and other hazards as you make your way in and out of the park. The Pirates of Mutiny Bay made its swashbucking return for the first shows of the season – refreshed for 2014. The family favourite show, situated along side Courtyard BBQ in the centre of Mutiny Bay, now sports an eye catching repaint as well as other improvements. On-stage character Stink-Bomb John, the flatulent skeleton has been given a fresh lease of life after work completed on his animatronics. Some familiar faces performed the opening day shows which now benefit from new songs and more dramatic sound effects whilst preserving the humour and pace of the previous year’s show.

Work appears to be progressing well on the major new family development for 2014. The area is full of bright, vibrant colours, with the re-themed Squirrel Nutty station – soon to become Get Set Go – the most noticeable. Various smaller details have been added to the theming for Get Set Go, including small CBeebies characters in the windows of the station, leaves being added to the old Squirrel Nutty branches, and the ride track receiving a fresh coat of paint. Work can also be seen to be happening on the Something Special Sensory Garden, with wooden paths and a small bridge being added to create what, according to the park map, will be a small water feature within the garden. 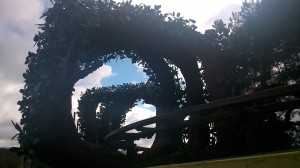 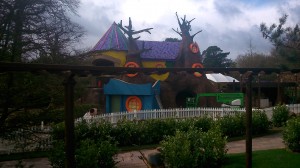 Fake leaves have been added to the old Squirrel Nutty Branches and the Get Set Go! buildings are looking very colourful 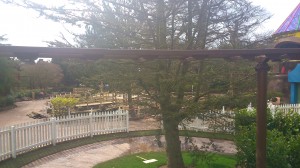 Work is progressing on The Something Special Sensory Garden

Several of the park’s food and retail outlets have received a refurbishment ready for the new season. Corner Coffee has a new outdoor seating area, and is now painted in a selection of eye catching colours. The Towers Street restaurant is currently closed in order for its very own makeover to take place and is expected to re-open alongside CBeebies Land in May.  Over in X-Sector, the Oblivion shop, X-Sell, has been transformed, with a new layout, interactive television screens (similar to those found in The Smiler shop), and a selection of new merchandise. Towers Trading now stocks a small selection of CBeebies themed merchandise in preparation for the new area to be opened in May, a range which will no doubt be extended later on in the season. 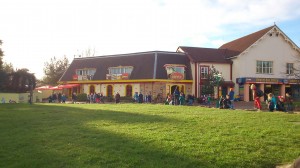 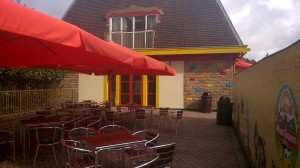 Corner Coffee has received a colourful make over 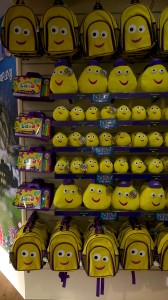 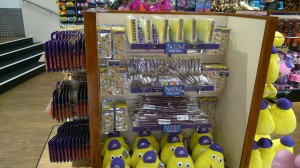 Towers Trading now has a range of all new CBeebies merchandise

Following on from the changes to the Merlin Annual Pass drinks capsules announced earlier in the season, the price of a single day capsule has also been increased. The quenchers now cost £7 although, unlike the Annual Pass option, they still offer unlimited refills all day.

Did you pay a visit for the opening weekend of the season? What was your experience like? Why not discuss your thoughts over in the TowersTimes Forum, and make sure to keep an eye on TowersTimes for all the latest updates throughout the 2014 season.