After a three month wait the Alton Towers Resort has thrown open its doors for the first time in 2014. Despite worries about the recent stormy weather, guests were able to enjoy the full half term offering for the Moshi Monsters themed event. Guests were able to participate in a range of challenges to gain Moshi themed badges and exclusive Moshi merchandise, as well as meet some of the characters from the Moshi Monsters.

On park, TowersTimes Forum members have noticed a number of changes and developments including an extension to the main retail outlet on Towers Street, Towers Trading, the effects in Duel’s tunnel being fixed and new flat screen televisions in Hex. A significant number of trees have been felled, or are marked to be felled in Gloomy Wood and behind The Flume. It is not known if the trees have been felled as a result of the recent weather conditions or because of other reasons, speculation has started that it could possibly be a sign of a potential future development for the site. 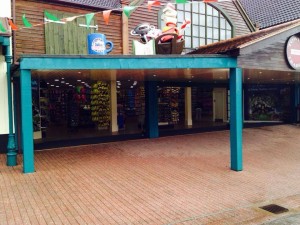 Nemesis also appears to have received attention over the closed season with new restraints, something which will be welcomed by many enthusiasts. Around the park a range of new fencing and signage has also been installed. Later on in the day it appeared that Nemesis may have started to experience some operational issues with throughput being reduced to just three rows on a single train. At this moment in time the reasons for this reduction in capacity is not known, however one possibility may be that ride operators were concerned about the ride stalling mid circuit due to the windy conditions.

In addition to the recent increase in main season ticket prices, the cost of on ride photography has also been increased for this season. A photograph will now set you back £10 compared to £8 last season, although the digital copy is now included within this price instead of being an optional extra. Annual Pass holders do however receive a 20% discount on this new price making an online photo and digital download £8. Also an additional ‘Premium Photo Souvenir’ option is now available for the cost of £15, and the multi-buy deal for photos remains with four photos costing £25. 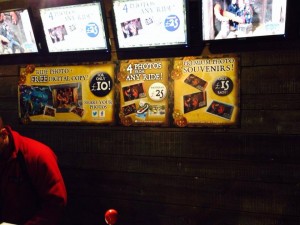 Perhaps the most hotly debated news though is the announcement from Merlin regarding the new Merlin Annual Pass Drinks Capsules for 2014. This year Merlin Annual Pass holders can purchase a capsule for £1.99 and then pay 75p each time they refill it. There will also be an option to refill the capsule with non-fizzy as well as fizzy drinks, although we don’t yet know what this non-fizzy option is. The capsules are also slightly smaller this year. Compared to the cost of the capsules last year, £16, whether this will represent a saving for individuals will depend on the amount that you refill, however for many the change will result in them spending more than previously. Reaction to this announcement has been overwhelmingly negative with many pass holders voicing their opinions via social media. Having announced the capsules are now available visitors to Alton Towers Resort were today informed that the capsules would not be available until March.

What are your thoughts on the recent developments? Why not head on over to the TowersTimes Forum to join in the discussion!

As the Half Term event continues throughout the next week, TowersTimes will continue to keep you up to date with all the latest news.