Nemesis@20; Bigger and Better TowersTimes Events and The Return of MI7

Home/Nemesis@20; Bigger and Better TowersTimes Events and The Return of MI7

Nemesis@20; Bigger and Better TowersTimes Events and The Return of MI7

TowersTimes are thrilled to announce the return of TowersTimes Events; bigger and better for 2014.

After a week-long social media campaign and following the huge success of 2013’s Summer Sizzler and Scaremazing, we can now exclusively reveal details for our eagerly anticipated first event of the 2014 season: Nemesis@20.

Join us on the very first day of the season, Saturday 22nd March, as we celebrate the 20th birthday of Alton Towers’ most iconic rollercoaster. With exclusive access to the park before any member of the public, our exciting event is set to be the biggest yet and will include the very first rides of the season on Nemesis, plus an exclusive question and answer session from none other than the creator of Nemesis: John Wardley.

Nemesis@20 promises to be the biggest event yet and tickets are certain to sell quickly.  Full details can be found on our Events Minisite, so what are you waiting for?

But that’s not all the news we have for you today. Some say we’ve kept him hidden in the deepest dungeons of TowersTimes HQ, whilst others seem to have noticed he’s developed a strange obsession with Postman Pat. What we do know is that he’s called MI7 and he’s back!

In a TowersTimes exclusive, we can reveal a series of aerial shots taken by our very own MI7. These unique images show the very latest developments at the Alton Towers Resort. One of the key things that can be seen is the progress being made on the Resort’s latest development, Cbeebies Land, with many of the existing buildings undergoing a colourful transformation, as well as an extensive amount of landscaping and building work to install the all new attractions. One of the most obvious changes is to the station building for the former Squirrel Nutty ride, with the roof being painted purple, and some of the façade a bright yellow – matching the general CBeebies colour scheme. Little evidence remains of the previous Old MacDonald’s Farm theming, suggesting that this area will be a complete transformation from what has gone before.

It’s not just CBeebies Land that is having work done however. A number of rides are undergoing closed season maintenance, including Rita and The Smiler. Scaffolding can be seen underneath parts of the track on both rides. The Smiler has scaffolding beneath the first drop and 8th inversion. It was around this area of the track that the bolts sheered away from last season. This would appear to suggest that work is ongoing to try and prevent a repeat of this infamous incident in the new season. However, there is little evidence of any further work having been carried out to the track, which will be disappointing to some people who may have been hoping the Park would have carried out more extensive track work over the closed season.

Over in Forbidden Valley, both Ripsaw and Nemesis have scaffolding in place, with Ripsaw looking like it is undergoing some substantial maintenance work. As for Nemesis, Scaffolding can be seen to one side of the Nemesis Monster, although it is unclear whether the work being undertaken is to the track or the station.

Head on over to the TowersTimes forums to see the full aerial update, exclusive to TowersTimes members. 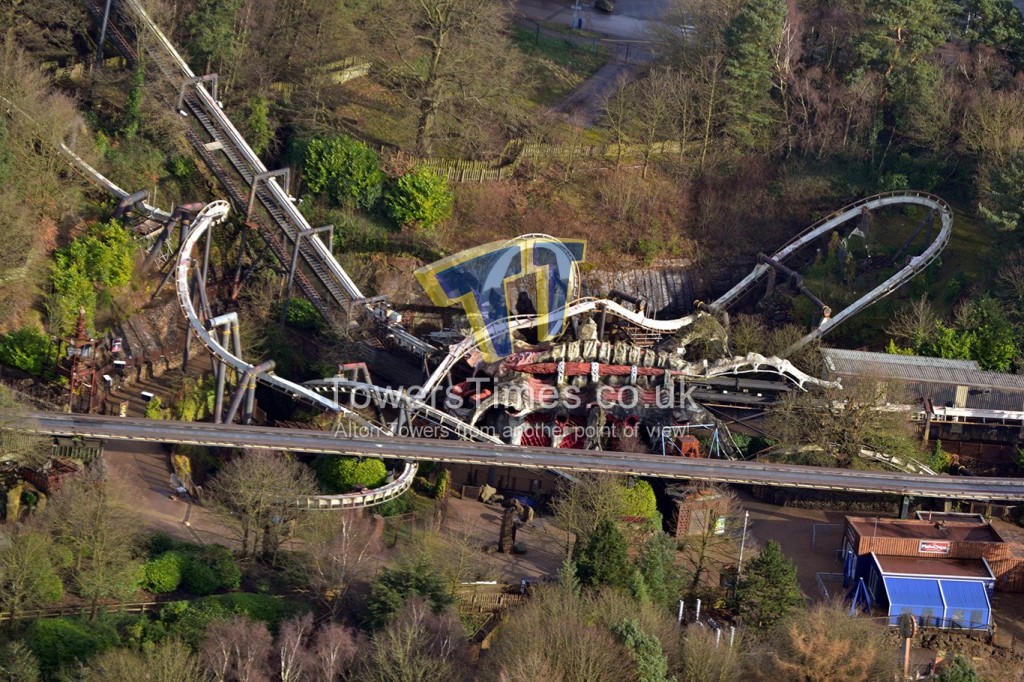 As the start of the 2014 season gets ever nearer, keep an eye on TowersTimes as we continue to bring you all the latest updates.