Scarefest 2013 Draws to a Close

Home/Scarefest 2013 Draws to a Close

Scarefest 2013 Draws to a Close

TowersTimes takes a look back at this year’s Scarefest as the annual Halloween event come to an end.

The annual Scarefest has come to the end of its 2013 incarnation at the Alton Towers Resort. Seventeen unforgettable days of terrifying scare mazes, silly spooks, costumes and decorations across the resort. There have been a wide variety of changes to Scarefest for 2013, so join us as we take a look back at the annual Halloween event. 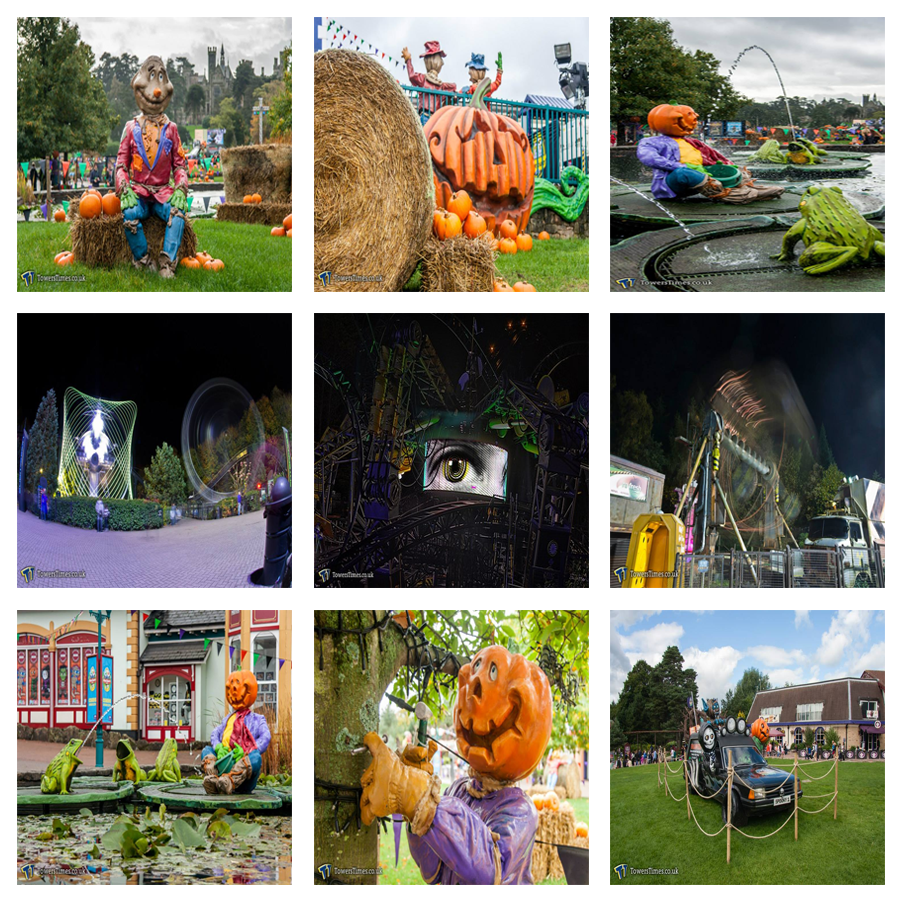 A Petrifying Powercut and a Spine-Chilling Storm

Scarefest 2013 opened to the public on Saturday 19th October, with plenty of people flooding to the Box Office in order to collect their maze tickets and freedom passes. Each year has seen Towers Street blanketed in a range of decorations, and this year was no different.

With the inevitable queue times racking up and the park hosting thousands of people, parts of the theme park were stuck by a power cut; claiming the operational abilities of Sonic Spinball, Oblivion and The Smiler to name a few.  Alongside this, the queue line for the Carnival of Screams was also evacuated, with the power cut sustaining a knock on effect for several more hours. Multiple cast illnesses also left Terror of the Towers somewhat lacking the spectacular performance it had offered on previous years, leaving very mixed opinions on the opening day of Scarefest.

The second day of the popular event looked to be more promising. With the mazes standing on full form, everything seemed to be going well until mid-afternoon, when the thousands of guests on the theme park became drenched after an incredible downpour of rain descended. The sudden shower left colossal puddles and rivers to run, even flooding several shops and the eating area of the Courtyard Tavern. Moreover, The Smiler’s queue line became so flooded that guests were made to use the extended temporary queue line outside of the attraction. 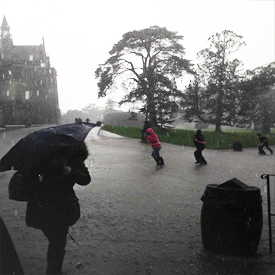 Despite the opening weekend blues, Scarefest was back in full force soon after for the remaining duration of the event.

2013 saw Terror of the Towers become a paid maze for the very first time since it originally opened its doors in 2002. Carnival of Screams was therefore swapped in to become the free maze, alongside Zombies! Scare Zone.

The return of The Sanctuary was a replica of the version that opened in early 2013, to accommodate the late opening of The Smiler. The addition of a new cast

[and some new ghost like make up for Dr Kelman] ensured that The Sanctuary was voted as ‘Best Scare Maze of 2013’ on
the TowersTimes Forum. With several days left until the end of Scarefest, actor Gerry Cannell announced he would be leaving the Alton Towers Resort after three years, and would therefore cease his portrayal of Doctor Kelman. His role as the mad doctor has been widely accepted and praised by the general public and enthusiasts alike, and members of the TowersTimes Scaremazing event were presented the opportunity to have a questions and answers session with him. After TowersTimes posted a news article regarding Gerry’s departure from the Resort, we received this message from him:

“HI! I just wanted to say I am really humbled by your post. It comes as a surprise to find that my work has been noticed by so many people. I just wanted to say a big THANK YOU to all your members, to all the many friends that I have made over the past three years. Once again, thank
you all, and perhaps we will meet again somewhere. Warm regards, Gerry.”

Despite the miniscule changes in The Sanctuary, Terror of the Towers received additional structural items and props, obtaining many reviews stating it had improved from its 2012 set up.

The eagerly anticipated Carnival of Screams had an uncertain future at the start of the year, with plenty of speculation discussing if it would be replaced by an entirely new maze. However, the ‘greatest show on Earth’ rolled straight back into the Goalstriker unit, this year complete with a fastrack queue, photo opportunity and a brand new theatrical finale. The addition of the Jack Nife story line and the tension created in the
final scene has led to a plethora of positive reviews for Carnival of Screams this year, and leaves hope that theatrical finales may crop up in additional mazes in the future.

Zombies! Scare Zone faced being reversed for the 2013 season, with the entrance and exit of the attraction swapping places in comparison to 2012. The scare zone also came with an additional extreme option, to the extent where actors would lock guests in a dark room on their own! 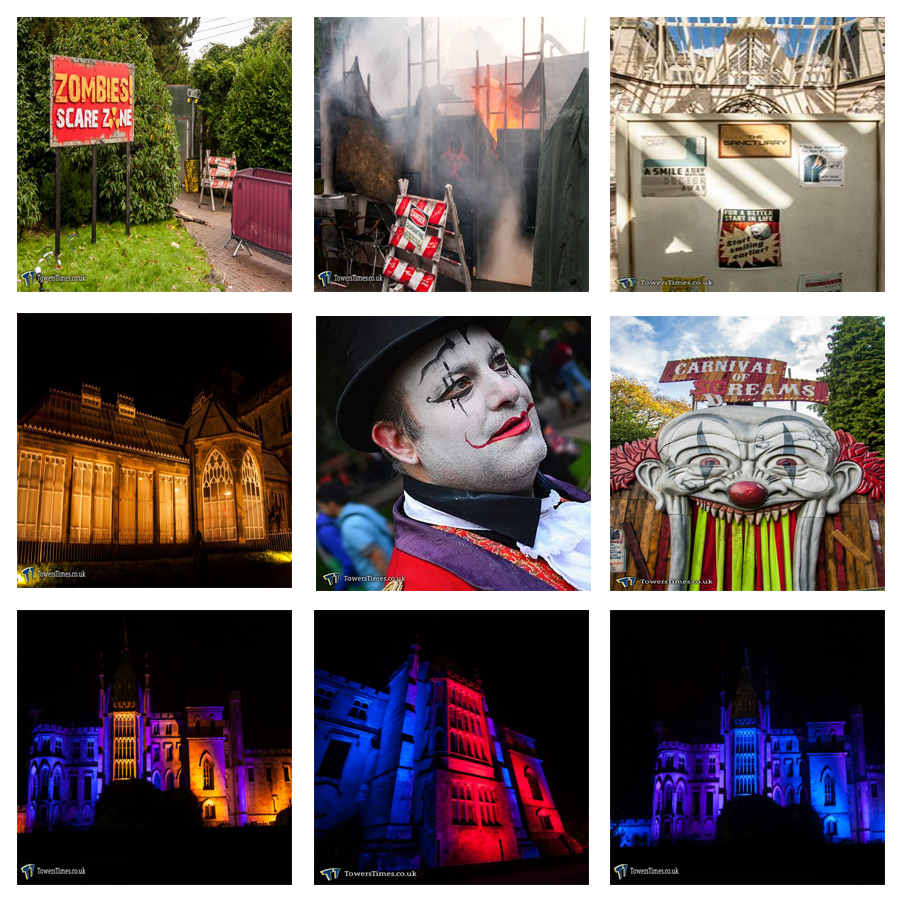 A Zone of Freaky Fun!

With the ongoing construction of CBeebies Land in the farm, Franklyn had to relocate his freaky fun to Fountain Square, renaming his area ‘Franklyn’s Freaky Fun Zone’. A brand new large statue of Franklyn sat in the centre of the area, overlooking the return of the popular Trick or Treat stage, and also several new additional attractions.

After it was revealed that CBeebies would be moving into Old MacDonald’s Farmyard for May 2014, various advertisements and banner replacements cropped up around Towers Street and the farm. Deconstruction of the Dung Heap playground is currently ongoing, whilst the
scenes of Riverbank Eye Spy have all been gutted away, with some of the props even making an appearance in the Carnival of Screams! Lastly, after many years of standing serving no purpose, the old Ice Show tent has finally been demolished.

With just one week left of the season, the annual Alton Towers Fireworks event is slowly dawning on the horizon. As revealed by head of Entertainments, Pete Cliff at the TowersTimes Scaremazing event, the Fireworks display this year has been created by the brains in the Entertainments department. What this could lead to in this year’s event is currently unknown, but we’re certainly looking forward to it!

Also mentioned at the Scaremazing event is the desire to have a ‘free flow’ maze at the Resort, much like the style of Cabin in the Woods at Thorpe Park’s successful Fright Nights event this year. Could we see a free flow version of The Sanctuary in order to accommodate the loss of Gerry’s Dr Kelman? TowersTimes will bring you all the latest updates on Scarefest 2014 as they are revealed next year.