Gerry is known for his role as the mad ‘Doctor Kelman’ in the Resort’s award winning scare attraction; The Sanctuary. Originally debuting in this role in 2012, Gerry as Dr Kelman managed to captivate the broad audience that passed through the doors of The Sanctuary in anticipation for the launch of The Smiler earlier this year, despite his antagonistic personality.

The Sanctuary was so successful, that it returned for a one month run earlier this year after it was announced The Smiler would be delayed until May. With the reopening of the popular scare maze doors, Gerry returned to gouge the joy out of his patients once again.

His performance as Dr Kelman, alongside his fantastic cast and crew, saw The Sanctuary bag the ‘Best Seasonal or Halloween Scare Attraction/Maze’ award at The Halloween Show, held at the resort back in April this year.

His work as Dr Kelman also led to a video segment from The Sanctuary being played alongside various other clips on the screen of The Marmaliser, as well as the several other large screens throughout the queue line for The Smiler.

Gerry has been quick to give credit to the crew he works with in The Sanctuary, telling TowersTimes that they are all “good mates” and work incredibly hard on a seventeen day run to make The Sanctuary as fantastic as it is.

Outside of The Sanctuary, Gerry has worked across various elements of the park such as inside the Wobble World play area, and escorting members of the entertainments characters (Sonic the Hedgehog and the Ice Age characters) around the park.

He also took part in signing a customised Smiler hat for charity, with the proceedings going to the Merlin’s Magic Wand charity.

TowersTimes would like to wish Gerry all the best for the future after his huge success in his entertainments role at Alton Towers. 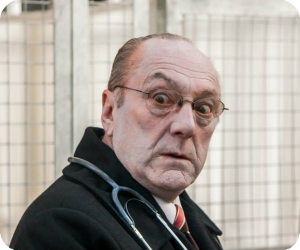