It’s that time of year where preparation is underway for the spooktacular event at the Alton Towers Resort. Scarefest is now just over two months away and the Resort have already begun advertising it on various posters around the theme park. The iconic hearse that sits at the bottom of Towers Street has also returned: 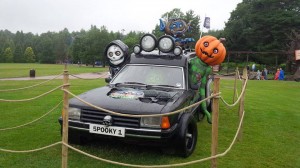 Alton Towers are dubbing this year’s Scarefest as “the most terrifying yet” and are promising lots of surprises and frights in store!

Earlier in the season, The Sanctuary and Terror of the Towers were confirmed to be returning from previous Scarefests. The Sanctuary has previously run earlier this season for a short period of time, potentially as a filler attraction whilst The Smiler was still being built. However it was unknown at the time what the fate of the Carnival of Screams scare maze would be.

Introduced in 2010, the Carnival of Screams replaced the popular Field of 1000 Screams when the mazes were situated up near the hotels. In 2011, the maze joined The Boiler House inside the Black Hole tent before it was demolished in early 2012 for construction of The Smiler. In 2012, the Carnival of Screams was moved to a location behind the Goalstriker unit, with many TowersTimes Forum members stating this was the ideal location for the maze.

Carnival of Screams has always been a maze that has required a paid entry ticket since its introduction, however this year the Alton Towers website states the maze will be free for all guests. Instead, Terror of the Towers will become a paid attraction despite being free since its introduction over ten years ago in 2002. The Sanctuary will also be an attraction that requires a ticket in a similar fashion to its previous incarnation for the 2012 Scarefest event. However, when the attraction was open in early 2013, The Sanctuary was open for free to all park guests.

Zombies! Scare Zone will also be returning this year as a free attraction, although its location is currently unknown.

Franklyn’s Freaky Fun Zone is a new spin on the previous attraction ran for children in Old MacDonald’s Farmyard. This year, the child friendly attraction will be located opposite Hex in Fountain Square. The following statement regarding the Fun Zone is taken from the Alton Towers Resort website:

“Join Franklyn, Skelvin, Patch and Phil as they take over Fountain Square and transform it into a colourful Halloween Playland, filled with spooky attractions, theming and activities that are perfect for young families! Attractions include;

“Skelvin’s Spooky Storytime”
Join Skelvin as he shares silly spooky stories which are perfect for little ones.

Franklyn has forgotten how to spook, so Phil needs your help to remind him. Some and see their brand new show and stick around afterwards, as Phil and Franklyn might want to meet you! Be there early as this spooktacular show is bound to be popular!

Join Patch three times daily as he talks about the creepy creatures in Franklyn’s Freaky Fun Zone. Discover how these seemingly normal animals take a spooky twist, when the Scarefest moon casts its eerie shadows.
”Character Meet and Greets with Franklyn and Friends”
Joining in with all the spooktacular fun with meet and greets, photo opportunities and more, remember to keep your eyes peeled for the “Famous Freaky Four” whilst out and about!”

Meanwhile up at the hotels, the Scare Rooms have been confirmed to be returning, although further details are expected to be announced at a later date. Pricing for the event when booked online is as follows:

The prices of the mazes are yet to be announced. Stay tuned to TowersTimes for all the details as we get them!