As schools begin to break up for the holidays and the busy summer period is about to be set into full swing at Alton Towers, the resort’s latest £18million investment has hit yet another spot of trouble.

The Smiler has managed to get through most of this month with very few problems compared to June, running all five trains and even facing queues of thirty minutes over recent days. However, the resort’s newest rollercoaster has now encountered a structural problem which has forced the ride to close.

According to reports on Twitter, numerous people heard a loud banging noise as a bolt fell from the ride and supposedly landed on the roof of the enclosed queue line. The queue for the ride was immediately evacuated and all five of the ride trains were stacked in the station and on the brake run. It was unknown by some at the time if the bolt had come from a ride train itself or the actual track.
However shortly afterwards, images began to circulate on Twitter showing the obvious gap between two rails on the track, in between the first inverted drop and the first dive loop. 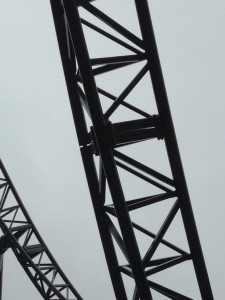 Whilst it is unknown at this current time how long it will be until The Smiler reopens, engineers are currently on site and assessing the situation. The ride was in operation at the time of the incident, but thankfully nobody was injured.

It’s more than just the track that has been suffering recently however. Due to the incredible heat that has been encountered by people all over the country recently, guests who have queued up for The Smiler have discovered that the projectors inside the 3D projection mapping room have been overheating, projecting text messages onto the walls rather than the usual 3D effects. As well as this, the exterior patterns on the queue line shop have already begun to peel off, no more than three months after being originally installed.

It is expected that the ride will be closed for the next day up to several days whilst the track problems are dealt with. Stay tuned to TowersTimes as we bring you all the latest information regarding The Smiler.