Now the dust has settled on the exciting announcement of the name of SW7, The Smiler, TowersTimes rounds up the last few days of news.

As you may have noticed TowersTimes has for a while now been bringing aerial updates of The Smiler construction to keep everyone updated on progress, However last night all eyes were on us not for the hint of more photo’s but instead for the update on the rides name, which has been speculated as “The Smiler”, “The Inoculator” as well as many others

“We’ve managed to baffle the nation and hopefully made a few people smile”.

More confusing information came when The Smiler had been labelled as “World’s First” once again, The ride had previously been mentioned as being a Worlds First but during recent marketing was labelled as ‘World Beating’ instead, something that has been confusing TowersTimes Forum members over these past few months. For now we can only speculate as to what this means.

The Alton Towers Resort updated their own SW7 Mini-Site regarding The Smiler, bringing a new site design and an interesting concept image which confirms that one of the most anticipated theming pieces from the original plans ‘the spider’ is still going ahead. 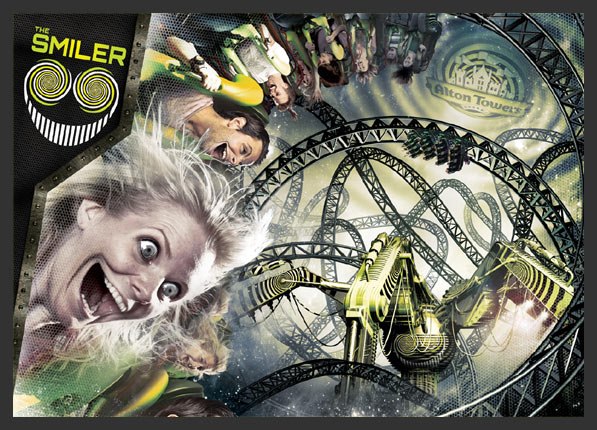 Curiously, the site leaked online a few hours prior to the official launch and contained a section titled ‘Lexicon’ – when the site returned this had been replaced with a Facebook link instead. We expect this section will be launched in the near future.

A surprising feature of the new official minisite is confirmation of a game coming to mobile devices based on the attraction. This appears to be a fairly extensive game with lots of features. We at TowersTimes cannot wait until it’s released!

You will be able to take control of the ride cars and navigate your way around the track in as perfect a line as possible. Experience the intense thrills, twists and turns of the ride, with the opportunity to be rewarded with upgrade points to spend on a wide range of track upgrades.

Plus if you visit the Alton Towers Resort, unlock hidden content using Augmented Reality technology, with access to additional images, videos and secret upgrades for the game.

The new official minisite also confirms that the opening day of the attraction has slipped from its original March 16th date to an as of yet unconfirmed date in May. TowersTimes will keep you updated on this.

We will continue bringing you coverage of The Smiler right up to and beyond the attractions opening day. We have more aerial coverage on the way along with a host of other updates and more. If you want to find out about these before anyone else we strongly recommend joining our TowersTimes Forum where we’ll be posting a lot of members only exclusive content.