Earlier today, an eagle-eyed team member spotted the addition of a new poster to the Sales & Information booth in Mutiny Bay. In the style of newspaper extracts, articles humourously describe Captain Black’s takeover of Merrie England.

However, one particular article amongst these has sparked considerable interest in the rumour department: 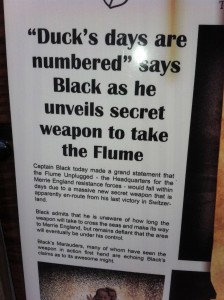 The poster explicitly describes the Flume being replaced with a “secret weapon” from Switzerland, although seems to be sketchy about the time frame of its arrival. Also notable is the description of “awesome might”, which seems reflective of a comment Merlin Entertainments CEO Nick Varney made in his response to our recent petition, describing SW7 as “awesome in every sense of the word”.

Are these parallels merely coincidence, or are the Alton Towers marketing department giving enthusiasts a subtle clue as to future developments? After all, The Flume is now enjoying its 30th year on park, and with the Imperial Leather sponsorship finally removed, is it time for a change? As for the references to Switzerland, will we be seeing further collaborations between Alton Towers and B&M, following their previous successes?