A Park in Miniature

Before the park embark on large building projects they often commission artists to build models of attractions to get a better idea of what the finished product will look like. This process also highlights any parts of an attraction that may not work, allowing the designers to rectify problems before going into full scale production.

Between 1994 and 1997 the park employed the services of Paul Jomain, a Model, Puppet and Prop designer, who has worked in a wide variety of media over the years from theatre and television right through to helping build Marvin the Paranoid Android for the 2005 movie, Hitchhikers Guide to the Galaxy. Paul built models for several of the then Tussauds attractions, and for Alton Towers he built models of various features which can be found within the park, as well as the concept models for the Alton Towers Hotel.

Below you can find pictures of the models built for Storybook Land, Nickelodeon: Outta Control and the Alton Towers Hotel. The models below were all built in a scale of 1:50 and both models and photos are by Paul Jomain. 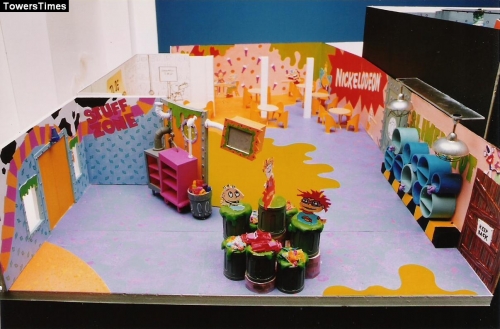 The Nickelodeon Shop (Off the Shelf) and Cafe (Slurp and Burp)