No one could accuse John Broome of lacking vision. It was under his leadership that Alton Towers began its transition into the theme park it is today, but his interests in the leisure world did not stop there. Whilst at the Towers he invested in various side projects, but perhaps the most interesting of these was his purchase of Battersea Power Station in 1986 with the view to creating a theme park experience in the heart of London.

The proposal featured both indoor and outdoor attractions as well as various eating and shopping options all themed around a traditional British theme. Several of the ideas for the new park drew on ideas that had already been successfully included at Alton Towers, or which seemed to be potential future attractions at the Towers as well.

Unfortunately after the costs more then quadrupled from the initial £35million estimate, the project stalled in 1989 but not before the roof of the power station had been removed to remove the internal machinery.

The effects of the issues at Battersea were also felt at Alton Towers itself, as it is widely believed that the financial troubles caused by the project are what led to John Broome putting Alton Towers up for sale, resulting in its transfer in ownership to Tussauds in the early 90s.

The plans for the ground level, including an ice skating rink and a set of dancing fountains as its central feature, along with a range of other theatre based attractions.

Another feature of the ground floor was to be a Dickensian themed retail street and restaurants, all of which were to be highly themed environments

The Mezzine floor’s main feature was to be a balloon ride which would allow guests to glide over the attractions on the floor below. Also featured on this level was a British Empire themed dark ride. 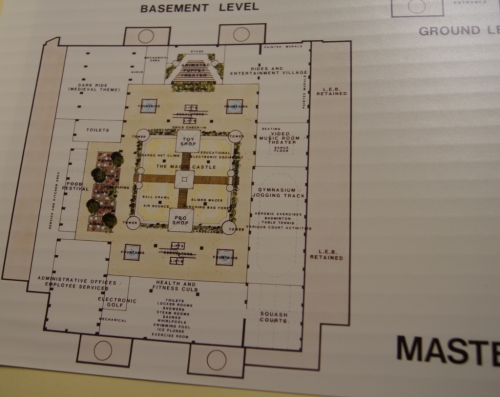 The Basement featured a leisure complex and spa, as well as a large play area, which seemed to draw heavily on the Kiddie Kingdom play area at Alton Towers.

Some concepts of various attractions proposed for the park, from generic kiddies rides through to an interesting Haunted Theatre proposal, a highly themed simulator and a Dancing Waters attractions, similar to one that could be found at Alton Towers at the time. 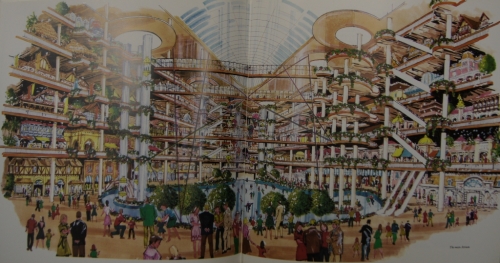 The outdoor area of the park seems to draw heavily on John Broome’s experiences at Alton Towers. It features versions of both a rapids ride and leap frog fountains, which had recently been installed at the Towers, as well as a Jumbo Jet coaster, which would have been a custom designed coaster by Schwarzkopf, who had designed the Blackhole and The Beast at Alton Towers.

Other interesting features include the proposal of a Flying Island, which would eventually be built at The American Adventure, one of John Broome’s management projects after he left Alton Towers.

Also the inclusion of a Runaway Train ride would seem to suggest a ride of this type may have also been on the cards for Alton Towers even before Tussauds took over.

At the same time as he was developing The Battersea, John Broome was also overseeing huge expansions at Alton Towers with large new attractions being added year after year. To sustain this sort of expansion he also oversaw various PR campaigns to spread the word of his park in Staffordshire.

Here we have a proposal for The Alton Experience, a pavement cafe to be built at the Garden Festival in Gateshead in 1990 in order to advertise the park. Various rides are represent here including the Corkscrew, Rapids and 1001 Nights.

It is likely this project never came to fruition due to the financial issues created by the Battersea project and imminent park sale. 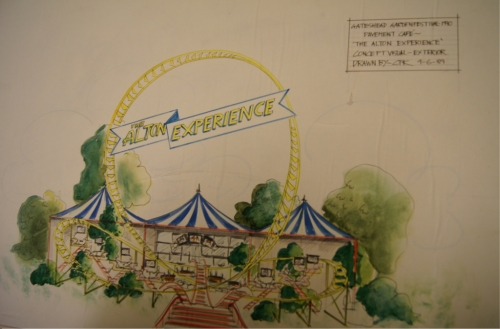