2004 was a highly eventful year at Alton Towers; with the construction of two coasters, the closure of several old rides, the Roper court case and the resignation of the park’s manager coming together – along with several other incidents – to create one of the most turbulent seasons in recent memory. Here we take a look at the highs and lows of the past season.

After a somewhat lacklustre 2003 season, 2004 started out looking bright for Alton Towers, with the promise of a new coaster and a revamped Log Flume to look forward to. However over the closed season these new arrivals were overshadowed by the demise of the iconic Swanboats and the confirmation of rumours that the Boneshaker, Vintage Cars and Cred Street Carousel would all be SBNO for the season. The list of closed rides grew over the February half term as Dynamo, widely considered to be the parks best thrill ride, was dismantled from its Forbidden Valley home and moved into storage.

On 27th March the park opened for the 2004 Season, with new coaster Spinball Whizzer wowing the crowds, providing thrills for all the family. Despite some criticisms for its lack of theming and its invasion into the views of the historic Towers, the ride got a big thumbs up from the general public and enthusiasts alike.

Merrie England also saw investment in the new season with the swans having been replaced by Splash Kart Challenge, a water based pay-per-ride attraction, as well as the Log Flume having been rethemed. With the sponsorship of Imperial Leather the ride had become “The Flume Unplugged”, promising bathtime with attitude complete with giant rubber ducks and power showers.

The other big addition for the season was the new ice show to replace Webmaster. “Circus of Illusion: the Magic of Ice” was based loosely on the popular Spooktacular ice show of the previous Halloween, with illusions and songs performed on ice. The show also featured a montage of past shows and parades which had occurred at the Towers, much to the delight of people with fond memories of years gone by. Coupled with the new ice show was the Towers Street Carnival, where the ice show performers entertained guests as they left the park at the end of the day.

Unfortunately almost as soon as Spinball Whizzer opened it was forced to close again in order for structural work to be carried out after an incident on its ‘sister ride’, Dragon’s Fury at Chessington World of Adventures. This meant that the Towers’ latest coaster was out of action for almost a month.

During May, after 11 years at the park, boss Ralph Armond quit, citing ‘differences of opinions’ as his reason. He was swiftly replaced by Russell Barnes, who had previously had success running one of Madame Tussauds’ Waxworks. Mr Barnes quickly made his presence felt by thinning out the management team, introducing several new games and sideshows and introducing sales around the park.

Also in May, yet anther ride closed. With little fanfare the 3D Cinema, one of the last of its kind, closed its doors. Rumours followed that the ride might reopen later in the year, but these never came to fruition. Another park stalwart also had a rough time in 2004; after a serious malfunction in June, which left guests hanging 200ft above the gardens, the Skyride was out of action for much of the season, eventually reopening in time for the fireworks.

The latter half of the year was dominated by the story of a local couple’s court case. The Ropers, who live alongside the park, took Alton Towers to court over noise issues, with the courts eventually siding with the couple, a decision Alton Towers intend to contest. If the ruling is upheld it may affect future events at the park, including the legendary end of season fireworks, as well as the operation of popular rides, such as Oblivion.

In September, Ug Land was closed off in preparation for Alton Towers’ 2005 rollercoaster, ‘Rita: Queen of Speed’, Europe’s first rocket coaster, which will launch from 0 to 100 kph in just 2.3 seconds and will be themed around racing. After its closure Ug Land was rapidly cleared of rides, sideshows and theming, which were replaced by footers for the new ride, which will wrap around the Corkscrew.

In comparison to previous years the season closed rather quietly, with the Halloween Spooktacular having been severely scaled down; while the ice show went ahead, the Terror of the Towers had been cancelled and the theming around the park was sparse. However, despite the Ropers’ court case, the fireworks spectacle went ahead as planned, ending the season with a bang.

After such a disappointing season, things are looking brighter for Alton Towers in 2005. Although it now looks likely that 2004 was the last season for the perennial favourite, the Blackhole, there’s plenty to look forward to in the new season with construction of Rita coming along at pace, the reopening of the whole of Cred Street as well as a general tidy up in the Forbidden Valley and possibly also the X Sector. 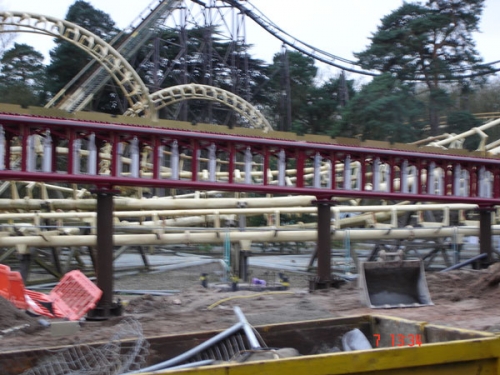