Scarefest returned for its second season in 2008, with the park unleashing their customary array of spooky fun and frolics for days and night of family frights! Building upon the success of the previous year’s event the park introduced one or two new frights to leave guests quaking in their boots.

Once again, the centrepiece of the park’s Halloween celebrations was Terror of the Towers, the horror maze set deep within the ruins of the Towers themselves. The most daring guests could enter this gothic labyrinth, despite the warnings that the Master did not care for trespassers, with he and his gruesome array of servants known to give chase to unwary souls.

Elsewhere the park’s spooky walkthrough was set to notch up the scares once again with Haunted Hollow: Live! Guests could join some of the Haunted Hollow’s residents as they were guided to Gloomy Wood along a short-cut that was sure to leave even the most intrepid explorer trembling in their boots. Also, the Haunted House really did strike back when the park’s ghoul-infester dark ride got a little bit darker for Duel: Live! This time the zombies really were coming to get you…

What Halloween celebration would be complete without Skelvin, Phil, Patch and Franklin, the park’s mischievous Halloween Characters, who were once again roaming the park to provide fun and frights for all the family. Brave young souls were also able to try for a prize or risk a surprise by knocking on one of the Trick or Treat Doors, with Millicent, Molly and naughty Meg. Guests could also join Lucy in the Cred Street Theatre as she discovered what’s going bump in the night in the new Scarefest show; The Haunting of Algenon’s Attic.

As ever, the park was transformed into a spook’s playground during Scarefest with the traditional decorations, but this year also saw the new Giant Pumpkin photo points, which could be found at various places around the park. The later closing time also meant that thrillseekers had the chance to ride some of their favourite rides in the Dark.

With reports of ghostly activity in Room 13 on the increase over the previous few years, in 2008 it was deemed too dangerous to let guests in, so its doors were sealed for good.

However, while the chains remained on the hotel’s old maze, there were reports of strange activity in the hotel’s defunct and dilapidated heating shack. So, in a new addition for 2008, Alton Towers invited guests to join them in discovering what really makes the pipes in the hotel rattle by exploring their terrifying new maze, The Boiler House!

Elsewhere in the hotels things were certain to go bump in the night in the resort’s new Trick or Treat Rooms. Guests could check in to one of these specially dedicated rooms and prepare for a night of family frights. Would Dad get a forfeit? Would Mum be in for a pleasant surprise? One thing was for sure, there was plenty of fun for all. What better way could there have been to round off a spooky stay in the hotels then with a Character Breakfast, where guests could meet one of the resort’s Halloween mascots over their Full English and a cup of tea!

Whatever happened to Constable Yates? Few who experienced them could forget the horrors that transpired down on Altonville Farm in 2007. But those guests who just couldn’t get enough could venture back to their sedate pastures for Field of a Thousand Screams: The Aftermath, a maze of maize where nothing was as it seems and the corn held some terrible secrets.

Once guests had their fill of scares, there was no better way to relax then with an evening of entertainment, with the all singing, all swinging Dance with the Devil show in the Alton Towers Hotel. Younger guests could go on a Ghost Hunt with Pirate Bill to banish the ghouls before they headed off to bed. 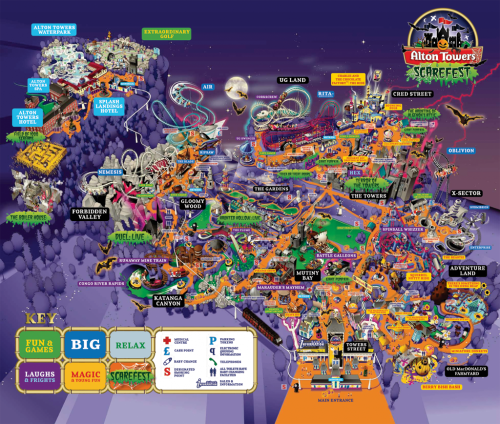 Escape to the Alton Towers Resort this Halloween and share in the season of spooktacular fun! Be rattled, spooked, chilled and thrilled by the spine-tingling combination of tricks and treats for all the family.

There’s a bubbling cauldron of activities especially for little terrors to enjoy, plus a whole host of spooky shows and adventures to celebrate Scarefest.

The fun continues into the evening over at the two Resort Hotels, with spooks and scares to suit all ages. Check into the new Trick or Treat Rooms in the Alton Towers Hotel and challenge the family to discover the hidden prizes…or forfeits! Book early to avoid disappointment on 0871 222 1644.

Youngsters can join Pirate Bill on his ghost hunt and enjoy the Dance with the Devil Show before joining one of our Scarefest characters for breakfast.

Plus, for older children and parents with nerves of steel, two outdoor scare attractions** will be available for both theme park guests and hotel residents. The Boiler House and the Field of 1000 Screams: The Aftermath guarantee real terror, so enter at your own risk…

Prices and Info
Park entrance tickets start at £28 for adults and £21 for kids under 12, or £78 for a family of four when booked in advance online at www.altontowers.com.

Terror of the Towers is not suitable for children under 14. Advance booking for special events is strongly recommended.
* Terms and Conditions apply. Subject to availability.
** An extra charge applies.
***Calls to this number cost 10 pence per minute on the BT network, other carriers and mobiles may vary.